vampirenerd wrote:I also agree that Alice might not spend as much time holding and cuddling Renesmee because she doesn't remember what it's like to be human, she never had the desire to have a child. But then again that same line of thought could be used to ask how is it that she loves Jasper the way she does if she doesn't remember it from her human life?? Hmm, not even going to go down that road lol.

At the risk of going off-topic, some things are instinctual. Baby animals have demonstrated behaviors that were not taught to them by their parents. I think the same applies here. Perhaps she did not understand it to be love right away, but just because you don't know about something doesn't mean it doesn't exist.
Top

That's a good point Rings. So maybe if love was instinctual to her than caring for Nessie will be also. I just don't really see Alice as the maternal type. I know that some women have more of the maternal instincts than others, which is clearly shown by the countless children who are abandoned everyday. I'm not saying Alice would be one of those I just don't think she would be as maternal as Bella, Rose, or Esme.

Which members of her family do you think Nessie will be closest to when she grows up? Which parent?

Of the family members I think Nessie would be close to I think is Rose. I could see her as a god mother of sorts. She would have been acting mother in the event that Bella had died anyway. I don't think Rose would let the only chance that she'll ever get to be somthing like a mother pass her by.
As for who she would be closer to as a parent would be hard for me to say. Yea Bella and Nessie had a connection, and not that I'm doubting it in anyway, but isn't it natural for a mother and child to have that connection in the womb. She loves her baby unconditionally anyway. But they could bond over the fact that at one point they both loved Jocab

And I think she would be a daddys girl. She and Edward could bond over there inteligence and similar powers.

I think she would be closest to Bella, they have this special bond even before she was born. I think Bella is the one she would turn to in all her major turning points in life. I think she would still be close to Edward but I always picture it in my mind that at some point Renesmee would feel annoyed and a bit of a rebel specially when she reach the stage wherein she and Jacob are going out what with Edward's over protectiveness and mind reading.

Apart from her parents I think its Rosalie that Renesmee would find her 'second mother'. Apart from Bella she also fought hard for Renesmee to be born, they would have that special bond too...
"Because each and every one of us needs our own personal brand of heroine."

In an interesting twist to my fanfic about Renesmee (see sig), I have Renesmee's ability to go both ways, but only with Jacob, and before they know how to control it, Jake actually thinks about Rosalie when Bella was pregnant, and Rosalie's assumed intentions (wanting the baby, not really caring if Bella died) and there was a rift between them because of it. I also have Rosalie and Emmett move into the city, since in the books it mentions they don't always live with the rest of the family.
♥ Amanda Beth ♥

ooh thatsa tough one,mothers and daughters always have that special bond where they can tell each other everything and yet i can totally see her being a daddys girl 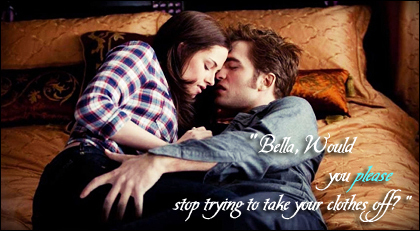 I think the ones she will be cloesest to are Bella, Rose, and Charlie. All of the family love her, it just seems to me that those 3 REALLY have a bond with her.

Here's something I just thought of.


Having blood in her veins may make her a stronger vampire, as it is stated that the newborns are so strong because of her own blood, but why is she growing so fast?

If Edward does not age at all, and Bella ages normally, would she not age slowly instead of quickly?

Total Twilight Fan wrote:Here's something I just thought of.


Having blood in her veins may make her a stronger vampire, as it is stated that the newborns are so strong because of her own blood, but why is she growing so fast?

If Edward does not age at all, and Bella ages normally, would she not age slowly instead of quickly?


Though I think this may be better discussed under the "Science" section, I have a theory on this. Alice explains that the fetus has something in common with Jacob because she can't see it and if you remember Jacob's growth rate to maturity is extremely fast once he begins the transformation process. Once he reaches physical adulthood, he stops aging until he quits transforming. Carlisle thinks that the fetus may have the same number of chromosomes as Jacob because of the whole hybrid thing. He says that they, the vampires, have 25 pairs of chromosomes compaired to a humans 23 pairs and states, "I thought that meant that our species were almost completely different. Less related than a lion and a house cat. But this new life - well, it suggests that we're more genetically compatible than I'd thought." .
So even though Renesmee is Bella and Edward's biological daughter, she would have similar genetic make up to other hybrids. Think of mixing the two gene sequences instead of one taking over the other. Which makes me wonder if Jacob's DNA would be different in wolf form...
Grayce

My previous post was moved here so I did some backreading on this thread.

According to the book, and their personalities, I think Alice is actually more of the fun loving aunt of the two. She thinks of Renesmee, and Bella for that matter, as life size paper dolls to dress up. She only got the headaches while Bella was pregnant because she was trying to see Bella around the fetus, which was completely invisible to her, so it made Bella fuzzy. Like trying to watch a TV out of focus. I think in Eclipse it says Edward says that they think that the reason Alice can't see the werewolves is that there is some sort of "natural defense" they may be born with. That's only a theory though and probably wouldn't be the same reason that she can't see Renesmee.
I think that after Renesmee is born, she enjoys spending time with her as much as the rest of the family, though she may not covet her as much as Rosalie. I think Alice would be the one of the other family members that Nessie is closest to. Think of how Alice is with Bella. She's always looking out for her best interest sort of an older sister, but her idea of fun is always a bit more outlandish than the others. Rosalie may be a second mother to her, but Aunt Alice is the one you go to when you want to go shopping, if you want to do "girl stuff".
Imagine the households divided up, each couple living separate from the other. Edward and Bella are her parents, young but still protective and loving. Esme and Carlisle are the grandparents as well as Charlie, with the never ending learning that the old and young seem to gain from each other. Rose and Emmett, more into life for themselves. Rose with her vanity and Emmett because he seems a little thick and living in the moment.

Then there's Alice and Jasper, who are almost more "colorful" than any of the rest. Alice has no memories of being human, and enjoys being herself. Enjoys playing human as I think Renesmee would do as well. Especially when she's older. And because Renesmee was never human either, they share that perspective. Jasper's background is so different from the rest of the Cullens. I think she would be comfortable around him, not only for his ability to control emotions, but because Nessie actually seems to have some type of that ability also. She charms almost everyone she meets without even knowing that she's doing it. She also knows that she would prefer human blood. I believe Jasper would also find he enjoys her company because she is almost the opposite of him. Jasper had to fight for everything and though he had allegiences that attached him to some, he never felt love until Alice. Whereas, Renesmee has known almost nothing but love since she first came into the world. They have quite considerable differences, but sometimes those differences are what draw you to another person.

I believe all the households indulge her and cherish her because she is so unique and easy to love.

Of her parents, she'd definitely be a Daddy's girl. Even as old fashioned as Edward is, he wouldn't deny her anything that would truly make her happy. He may overreact to situations when she's older, but she still has him wrapped around her little finger.

Just my opinion though...
Grayce